There are more people who pretend to love Anand than who actually love it!

April 16, 2020
I met Mark Valentin when I was in Singapore at the beginning of this year. He is British. He is a Software Engineer at the world's largest online video streaming platform (I cannot name it, but hopefully, you guessed it). We have a common interest - classic rock and guitar solos. He is way more skilled at playing guitar solos than me. He has sent me several videos of his covers of classic rock songs such as Sultans of Swing, Dream on, Unforgiven, and some of his own original compositions. He is truly a rockstar.

Recently, we were talking about world music and he told me that he had heard Bollywood creates lots of musicals every year and he would like to try some of them. I was surprised to see a classic rock fan having an interest in Bollywood music. I told him that I will send him a song that he can try on his guitar. First, I thought of sending him a trending number but I realized that the newer songs have lost a lot of melodic complexity. So, I decided to send him a classic that my father loves - Aye Mere Humsafar, from the movie Qayamat Se Qayamat Tak. There is a beautiful guitar intro and a few melodic violin solos in this song. 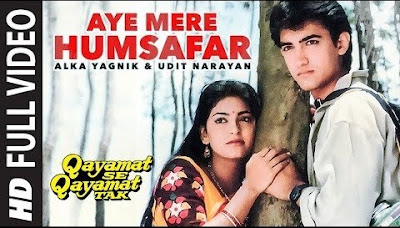 Within a week, I got a reply back and he told me that he loved the song. Not only the riff and solos, but he also loved the rhythmic complexity and the music video. I told him that this was released a decade before I was born.

He made an observation, however. He told me that the video that I sent him had a large number of dislikes. There were about 42K dislikes which were about 11% of the total numbers who reacted. I thought it was a decent number because older songs are not well appreciated by the audience nowadays. He sent me the video links of popular western numbers released during the same period. He told me that they have very low dislike rates. He pointed out that Bollywood music seems to be under-appreciated. I checked the statistics for other videos then. He was right, it looked like Bollywood music is under-appreciated. The first thought that came to my mind was - Maybe the people from the west are not able to appreciate the beauty of these songs. They might not be able to comprehend the context in which the songs are placed.

Mark has access to analytical data of videos. He can aggregate the data based on the country. I told him to send me the like-dislike data by country. He sent me the same and I was surprised to see the numbers. I cannot publish the entire data; he told me to keep it for private use only. Here is an excerpt from it:

It looks like we are not comfortable with our own classic works. I was a bit moved by this. I decided to check other videos and other websites where ratings for these movies & music are available. I collected a lot of data. In my Software Engineering job, we are often asked to find inferences from data. Here are my inferences from my observations:
Oh, wait! I have some inferences for the intellectuals as well:
and countless more that you should have understood by now.

People have been judging artworks based on their stereotypes. Most of the reviews on review-aggregators websites like IMDb, YouTube & Metacritic are based on favoritism. People try to pretend instead of being who they are. I wish people can learn to be themselves. I also wish that people can learn to respect everybody's thoughts and emotions. Classic artworks have turned into meme materials. It is not unacceptable to have a laugh at those jokes. But, sadly, people have started disrespecting them. They are disrespected so much that, even if someone likes those classics, he/she may be insecure about his/her thoughts. He/She then tries to follow the herd.

Not everyone can be a Batman fan no matter how cool it sounds. There should be no peer pressure on him/her to like Batman movies. Similarly, he/she must not feel any pressure to like Batman movies. Peer pressure destroys half of happiness in life. It makes you feel like an underachiever. None of your decisions must be based on peer pressure. Don't feel insecure about your thoughts. You might lose some friends when you are original, but, whoever you would be left with would be the true ones.


It okay to be cool. It is super cool to be original!