I was introduced to this concept long back when I was in class 9. There was a presenter on stage who showed us the following image: 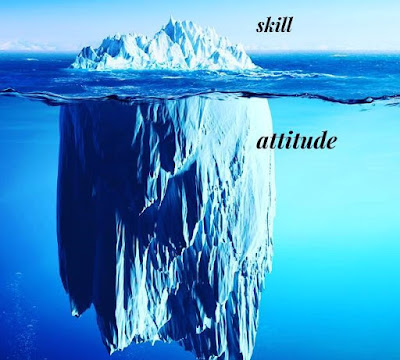 Skills are something that people around you can see and judge you with. Attitude is invisible. It is only when people take a dive deep into you, do they realize how worthful you actually are. It took me more than 10 years to realize the importance of this.

Let me begin with a story. Three interns - 1 boy and 2 girls were hired for my team and I was their mentor. In their first few weeks, they were required to go through their technical training. The first course was Frontend - something that is tricky but still software engineers find it unworthy and an insult to their skills. They were required to work on it for the next 2 weeks and submit their assignments to me for review. One of the girls was extremely enthusiastic. She submitted the assignment within 3 days. I reviewed it, provided feedback, and asked to improve the code (optimization and readability were my concerns). She reverted back with improvements within 2 days. At this point, she already crossed the minimum quality criteria for assignments. Ideally, I would have approved but I saw this as an opportunity to train her more. I gave her some extra work and told her that it was optional. By the beginning of the next week, she completed them and I saw enormous improvement in the quality of code that she submitted. On the other hand, the boy never asked me for suggestions nor did he submit his assignment until the end of the last day of the second week. I already did a thorough review of the girl's code and so I asked her to review the boy's code and point out the most basic mistakes. She added her comments. I upvoted in the agreement with all of them. The boy reverted back only after another week. In a personal meeting with the boy, I was able to clearly see that he was upset over the fact that a girl had reviewed her code and left some comments. Moreover, he thought that Frontend engineering was not something that was worth his talent. Little did he knew that I already planned for a challenging Backend optimization task for him as his next assignment. I discussed this incident with his manager and he asked me to give him another chance. I did so. He submitted his assignment and I reviewed his code. The code was worse than before. He was unwilling to show any signs of improvement. Finally, after 3 weeks, his internship was terminated and he was asked to go back home. The two girls completed their internship and received their interview call for full-time.

Was the boy not skilled enough? No. He was more qualified than either of the two girls for the job. He was a candidate-master on CodeForces - one of the best competitive programming platforms. Such people are called purple coders. Then what went wrong? The answer is clear - his attitude went wrong. Here are things that he could have done better:

Post Story: The organization that I am speaking about is Google LLC.
Your skills and knowledge have the least effect on your success. It is your attitude which matters the most. Your success is of no use if you are not humble enough to help others reach the same height. Often it seems like you have struggled the most and you deserve the most success in life. It is not so. Remember that there is always someone who has struggled more than you, achieved less than you, but is still humble enough to work harder rather than complaining about his fate.
Your attitude shows how much you value people's opinions. Your attitude shows what you think of others. Your attitude shows how you will handle rejections - by introspection or by blaming everyone around you. A few years later you would never remember what you achieved. But you will remember how you treated people.
If you are someone who doesn't like a fellow co-worker or is not liked by someone or thinks that the world is stupid, it might be a good time to start thinking about your own attitude. Try to reach out to someone who would help you with introspection. It often feels like everyone is wrong when you are going wrong. You just need to start with the question, "I am wrong. The question is where?". This attitude is the only way of reaching great heights of success.