Dogecoin (a cryptocurrency) reached $40 on 16th April 2021 from just $10 a few days back. I am not an expert in this domain, but, this to me is purely a game of speculation. People are believing that cryptocurrency has value and hence it has value. There is no proof of work involved in Dogecoin as opposed to Bitcoin. A few people are now a billionaire overnight. A cryptocurrency that started as a joke has paid off to their developers.

Almost all financial instruments today are nothing but mere speculation. Share market started with the idea of pooling money to run a business and share profits. But soon enough the market was turned into a speculation arena. Huge volumes of shares are traded every day. Most of the time the value of a share has little to do with the actual value of the underlying asset. Speculation pushes up their prices. The same goes out for mortgages, bonds, and debentures.

Taking an eagle's view, one can realize that money in itself is a speculation. It has been speculation since its very inception. Earlier there used to be a gold standard that defined the value of a currency. Postcapitalism and with the coming up of floating exchange rates, the value of the currency is what people believe it is - people express their opinions by controlling the demand & supply chain and the currency gets its value. This has also opened grounds for huge speculation and operator controls on the exchange markets. Money has value because people believe that money has value. We usually use the monetary wealth of a person to determine if he/she is successful or not. The more money one has, the more successful he/she is. What if this very assumption of ours about the value of money turns out to be false? Will every successful person become unsuccessful?

There is a term becoming very popular nowadays - Financial Literacy - which means having the ability to manage personal finances, accounts, and investments. Many financial literates argue that financial literacy is far more important than any other education. Most people completely agree with them after being introduced to the concept of speculation. If you can speculate well, you can make fortunes overnight. You don't need education. You don't need to do your boring job and work tirelessly to get a promotion. You can make money work for you. You can invest carefully in building assets and earn money (something called money multiplication, I hope that you have read the book - Rich Dad, Poor Dad"). This is why financial literacy is important.

Let's remove speculation from the picture for a while. A currency gets its value from the resources that the nation owns. A resource can be natural or artificial. The value of a resource is determined by its utility for humans. But if the total amount of resources/assets is fixed on this planet, how can everyone multiply their money? Someone has to lose for someone else to earn. Is that correct? Not exactly! Two processes can create more money - Production, and Inflation. Production is the conversion of resources into something that has higher utility for humans. For example, wood being converted to a closet or silicon being converted to computers. Production can increase the value of resources. If the value of the resources in an economy increases, the money also increases. Inflation is the process of increase in the price of all the commodities in the economy which usually happens because of the human nature of greed. Some doctor in a clinic thinks that he must be paid more and raises his consultation fee. Hence everyone else is forced to increase the price of resources that they own.

The sad part here is - you need to have money in the first place to be able to multiply it. Now, if you are able to save more than 20% of your salary after meeting all your needs, congratulations, you are among the top 10% of the people on this planet. 90% of the population don't even earn enough to survive, and suffice their living; Money multiplication is a far fetched dream for them. Coping up with inflation is the best thing that they hope for. Where is the generated money going to? It is actually coming back to the hands of the top 10%. Actually, the top 10% only get a minor share of generated money; most of the wealth is getting concentrated in the hands of the top 1%. 1% of humans in the world own 99% of the wealth and hence 99% of all the resources/assets. They are the gurus of financial literacy. They don't produce or increase the utility of resources. They own the resources and make others increase their utility for them. In exchange, they are paid some fees as salary. 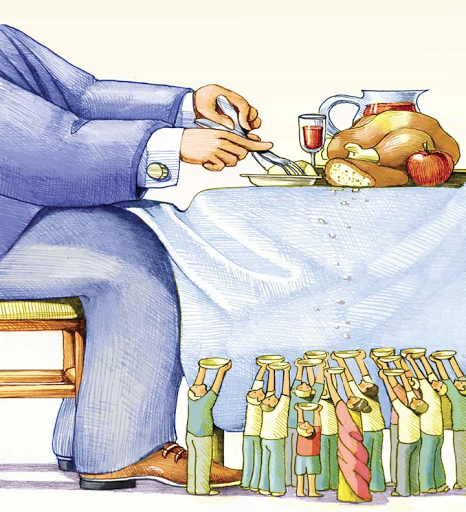 This gap between the haves and haves-not is constantly increasing. The riches keep showing us the dream of luxuries. Such dreams are driven by our greed to earn money. Success is money. Money is speculation (as I pointed out earlier). Hence success is also nothing but mere speculation. It is possible that the gap between rich and poor increases so much that people lose their trust in money overnight. Every person who is successful today would become unsuccessful. Here is my prediction (a very strong gut feeling that I have) - if the gap keeps increasing the way it is, human civilization will see a collapse within the next two decades. All our scientific discoveries & inventions and our dreams to start a civilization on Mars will go in vain. The 2008 housing market crash only crunched the economy. This will mark the end of our democratic civilization.

Why do people talk about financial literacy? Well, not everyone does. Only those who were able to make a fortune out of other's hard work say that financial literacy is more important than any other form of education. 1% of the population may have most of the wealth but the world functions because of the rest of the 99% of the population who are involved in real production. They are the ones who give money the value it posses today. If everyone involves themselves in finances instead then there would be no real production - the total money in an economy would remain the same and if the money still increases, it would be all due to speculation. Your education was NOT a hoax. Your education made the world stand on its feet. Never undervalue your education for financial literacy.

Is there anything that I want to ask my readers to do to help close the gap? Frankly speaking, I don't have any solution for this. And I don't want to make any assumptions about your financial status. It's always less for humans after all. I just wanted my readers to be aware of this. At the end of the day, the number of people who weep at your funeral is what you have earned in your life. There is no carry forward at the end of this balance.