It might be a bit late to post this. I couldn't find much time lately. After almost 3 months of exercise, I bought my first car. This is not only my first car, but it is also the first car of my family. Presenting to you - 2016 Mazda MX5 Miata Grand Touring.

That little piece of shit in the car is me!
Some top features that I really wanted to have in my first car:
It is so rare to find a manual car these days.
Now it is time for a little story of the struggle that I had for the last 3 months. When I came to the US in the month of October 2021, I had no plans to buy a car. After checking out the pathetic public transport in the bay area, I realized that it was important for me to buy a car. Also, I was almost 25 and I had still not learned to drive a car. I decided to get a car under $10,000. I was surprised by the number of automatic transmission cars in the country when I first came to California.  I regularly consulted with my uncle to make sure I am doing the right thing. He has been driving for more than 20 years in this country and so he had a solid experience. I started checking out offers on OfferUp - the place was full of scammers. You might see a good deal online but as soon as you go to see the car, you would realize what piece of shit they are selling - some required very high initial maintenance, some didn't start, and one of them didn't have tires (and the owner asked us to bring our own tires). And these scams were after we made sure that the VinAudit report of the car says that it is `clean titled`. After almost a month of a fight, I gave up and decided to use a better platform to find cars.
I started checking cars on AutoTrader. The interface was much better and it had an option for distinguishing between dealers and private sellers. We were a bit afraid of dealers. Unfortunately, I was unable to find a good car from private sellers. Slowly I realized that due to the ongoing chip shortage in the market, car prices have shot up. A second-hand Toyota Corolla was selling for more than the buying price. I regularly visited Carvana to see if I am able to find a good second-hand deal. I was mostly looking for a good family car (4 seater sedans) with an excellent average - Honda Civic, Hyundai Sonata, Toyota Corolla, Toyota Prius Hybrid, etc. were on top of my head. Meanwhile, I was also a bit more inclined towards convertibles like Ford Mustang. Did I say `a bit`? No, I always had my second eye on finding a convertible. I am a young, single male with no friends in this country. Why did I even consider a family car? I did find a couple of Mustangs and Miatas. But they came with their own problems - the Mustangs had terrible gas average and Miatas were too old to be safe.
In December, I almost dropped my plans to buy a car. I decided to get my license first before buying a car. I appeared for the driving test at New Hall Avenue, Santa Clarita. I made 10 minor errors and 0 critical errors and got the license. A few days later, my uncle saw a 2016 Mazda Miata GT listed on Autonation at Cerritos. It was an almost new car (single owner, driven for 46,000 miles). It was a manual. The car was listed for $21,687. With all the added taxes & registration, the out-of-the-door price was $24,000. It was still a bit expensive. In the normal days (when we didn't have any chip shortage), the same car might have cost $2,000 less. But I still decided to take it. We paid $10,000 and took a loan of $14,000. There we go! 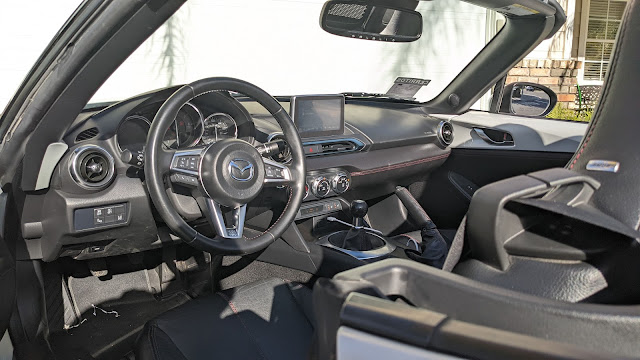 I still don't know for sure if it is a modern car or a vintage car. There are some vintage features like analog speedometers, manual transmission, mechanical handbrake, etc. And there are some modern features like cruise control, navigation system, lane departure detectors, blind-spot detectors, etc. I think Mazda decided to keep it a classic sports car with a feminine body design and all modern safety equipment. It has powerful Bose speakers installed on the seat itself. Long drives could never be better.

I took some time to get a hang of the manual transmission (since I passed my driving test in an automatic). Now, I don't even feel the difference. Changing gears is secondary. It is so natural that I can do it even without thinking. The clutch gives me excellent control of the engine engagement with gears. I practiced a lot and now I am good at deciding the right gears that I would need. When I need to stop, disengagement gives me complete control to slow down and let the momentum of the car be consumed completely without braking. The gas average was 32.8 mpg when I bought the car. With practice, I took the average to 33.1 mpg within 20 days (I mostly drive in the city limits). Everyone should learn to drive a manual. Manual gives you excellent control over the cruise. Moreover, you know what they say in the US - to prevent theft, you can either lock your car or drive a manual.

Now I understand the love of a man towards his car. Sometimes I press the gas pedal hard and I can feel the car scream. I can feel the harshness of the engine. Sometimes it stalls and I can feel how hard I am being on the gears. Once I underestimated a dip and pulled on the second gear. I felt that the front did hit the ground. I immediately stopped and made a thorough inspection. Thankfully, there was no sign of scratch. I clean my car every week. I get all the service done on time. I am (kinda) emotionally connected to the car! When electric cars overtake the car market by 2027, I will sell this manual gasoline car - advertising this car as a classic gasoline vintage, only for rich people.

Update: Unfortunately, I had an accident and the car is gone now. I survived a what-could-have-been a very fatal accident. I was in shock for several nights. Now that a couple of weeks have passed, I have recovered. I did receive $28,000 from insurance. I could have got this car repaired but then I decided to let go of it. 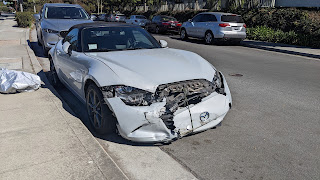 May 11, 2019
Here came the phase of my life. The time that seemed darker, Than the evening of the winter solstice. The moment when I realized, I was about to lose the most precious gift of my life. No tears fell, I was numb.  Things were happening. Nothing in my control. I couldn't say if I was dead or alive. My senses were working, But, I had no sign of life. "What went wrong?" thought my mind. "Is it me again? For the one-millionth time!" "Should I wait for her to take the next step? Or, should I be the first one to apologize?" The past dawned upon me that night. He showed me the times when I had cried. He exhibited the showers of insecurities. That she, with time, had blessed upon me. Cause, Yes!, I was the one who had been more involved. In a relationship, that was sure to fail and tear apart. Never did I realized, That it was my obstinance to get her in my life. And when I forced against her will, I lost my
Read more

A Girl in Agony